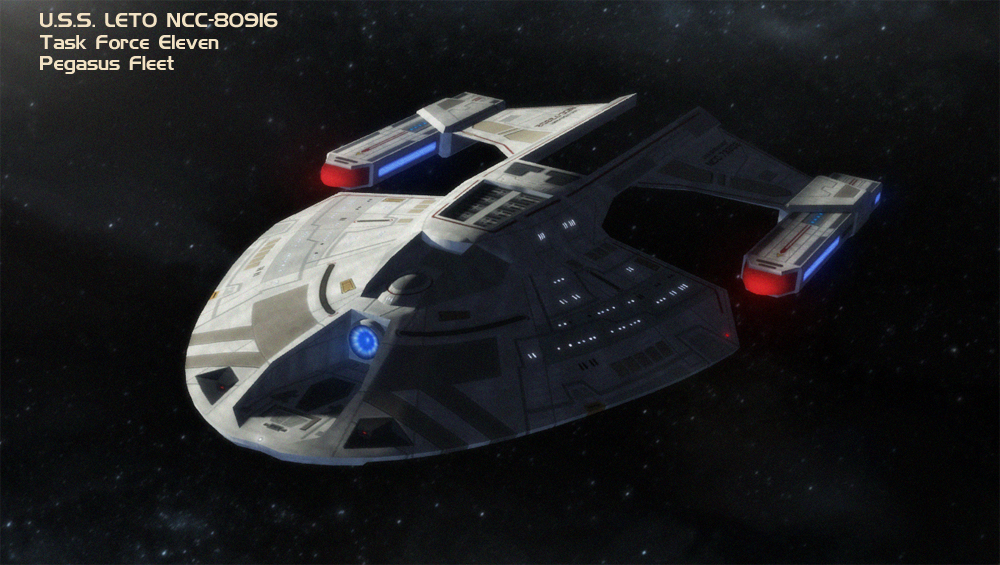 The Mission of the USS Leto is:

1. Provide a multi-mission mobile platform for a wide range of scientific and explorative research, and diplomatic projects.

3. Serve as a frontline support vehicle during emergencies and a platform for the extension of Federation diplomacy and policy.

4. Provide non-critical functions such as transport of personnel and cargo when necessary, extended aid, and short-range patrol. 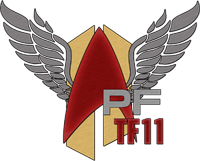 The USS Leto is a Norway Class diplomatic and science exploration vessel, While her armaments are geared to peaceful exploration, due to her diplomatic mission she is extremely well defended. She is also equipped for atmospheric landings. The Leto is a very versatile ship. The ship is commanded by highly experienced commander who has served in Pegasus Fleet and is also a white corded member of the 95th rifles marine brigade. Commander Maia Sterling was recently the Fist officer of the Task forces Flagship the USS Tomcat. Commander Sterling herself a science specialist has demonstrated excellent leadership in the past and is ready to finally sit in the center seat.

So come join the Leto Crew as they head out to explore the lesser known regions of Federation Space in an attempt to stop the hostile and rogue agencies that threated Federation lives and property both in and on the fringes of known space.

Once the introductions were done and all the delegates had joined them, Ambassador Langley adjourned to the main banquet hall of the Leto.

The Honor guard had been impressive, all officers were in dress uniforms as well as the Thorion delegation. This was a formal ambassadorial event one of…

Nishu was walking amongst the corridors of the ship on rounds along the ship, as she walked by nodding and grinning to different officers while saying hello to them. She kept walking by to the Turbo lift, as she walked into the lift she tapped her comm badge to her…

Lieutenant Kasey Tanger had a nice conversation with the second officer, Lieutenant Ryan Blake, and found they shared some common ground. They were in the same class at the academy and now their paths were merging as they are now serving on the same ship. Tanger was…

Toda Brebruit was an expert in security and infiltration assassination and intimidation. She had suspected who Lt Angelina Brannon actually was and kept her under surveillance since before she had even arrived on the this ship. In fact part of the reason she had been assigned to this ship…

Nick was storing his microphone in the storage area set aside for the lounge entertainment. He returned to the lounge proper as Maia was speaking with the last couple of officers preparing to retire for the night. He looked at Maia and felt a giddy rush envelope him.

The Leto has arrived at Thorion 4 and is now docked inside Thorion Starbase Liberty.

We have umbillicals hooked up and have reduced our reactor to minimum power. The hull of Starbase Liberty is plated with carbon neutronium, So the ship will be safer than if…

There was the chime and the computer said "Personal Log Activated. Begin recording."

"I am on an express shuttle to meet up with the USS Leto. I have been assigned to the ship as the…

Angelina had spoke with Dixie RU and now knew something was up and that someone could possibly try to kill her like they did her parents. She also knows she has Star Fleet duties to uphold to protect the ship. And the crew as well. Plus protect the Diplomatic Delegation.…

The Leto has arrived in Thorion space. We have been intercepted and escorted by a combination of Thorion Ballista’s and Javelins, sub-light craft capable of full impulse speeds. The Ballista’s are manned the Javelin’s are drones. They are fairly heavily armed for craft of their size…

We have taken aboard eight Saurian miners who were hi-jacked. We answered their distress call and found them floating in space. The apparent leader Stroth says they were attacked by four ships, 3 Klingon K’Vort Class Battlecruisers and another ship of unknown design, however they were…